A Brief History of Yoga: Complete Overview of 4 Eras

Yoga has its origin in India and it has been practiced here for centuries. Yoga is an excellent way to get peace of mind and release tension and anxiety. The world ‘yoga’ is derived from the Sanskrit word ‘Yuj’, which means ‘to connect, to join, to unite’. Yoga is very beneficial in today’s busy life. You can see that now yoga is assimilated in other religions as well, like Buddhism, Sufism and Jainism.

The West has already included yoga in its culture. Because of the adaptation of yoga here, researches have been done to find out the date and origin of yoga. According to archaeological evidences, it was found out that yoga started at about 3000 BC, which means 3rd Millennium BC. During the excavations of the Indus Valley civilization, many seals that depicted the pictures of various yoga postures were found out. Religious gurus and yogis are of the opinion that yoga was in practice before the Vedic period, and that the discipline and knowledge of yoga was passed from one generation to the other orally. 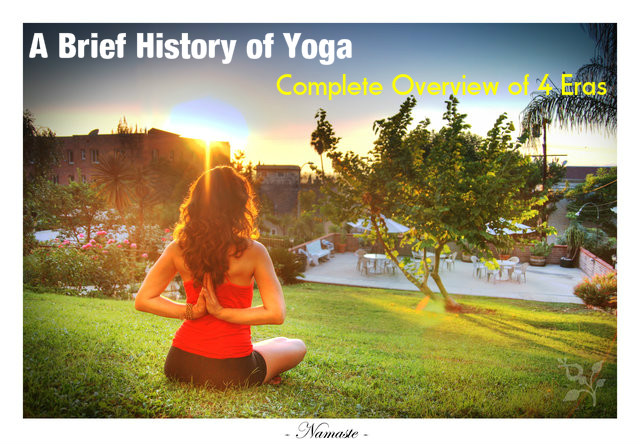 The yoga that we practice today is the modern form of yoga. The essence of it is derived from the ancient yoga. ‘The Yoga Sutras of Patanjali’, written by Patanjali, is the first book on the history of yoga. This is a set of 196 sutras or aphorisms. Patanjali is even known as the ‘Father of Yoga’, because of this book written by him.

We can divide the history of Yoga into 4 Eras:

The sacred Vedas, which date back to 1500 BC to 1200 BC, contain amazing chants and practices of yoga in them. The teachings of the Vedas that are found in yoga are called as Vedic Yoga. Veda is derived from Sanskrit word, which means ‘knowledge’. Vedas are a collection of texts that contain songs, mantras and rituals that are used by the Brahmins, who were considered as the Vedic priests. The word yoga was first mentioned in Rig Veda, which is the oldest of the Vedas. We have four Vedas, which are Rig Veda, Yajur Veda, Sam Veda and Atharva Veda. Rig Veda consists of hymns that praise the supreme lord. Yajur Veda provides you knowledge of sacrifice. Sam Veda is a book on Chants and Atharva Veda is the knowledge of Atharvana. During this time, yogis used to stay away from all, isolated, to get moksha (salvation). They used to perform various sacrifices and chants to gain illumination.

Yoga was refined and developed by the Brahmins and Rishis and they documented these practices and beliefs in the Upanishads. Upanishads were created around 800 to 500 BC and this is the pre Classical Era. Upanishads contain 200 scriptures, which explain the teachings of the Vedas. Upanishads are also regarded as the end of the Vedas. In around 500 BC, Bhagavad-Gita (Lord’s Song) was created, which is one of the most renowned Yogic scriptures. In this scripture three main streams of yoga are united, which are Bhakti Yoga (connection with the supreme being), Jnana Yoga (connection with knowledge and wisdom and Karma Yoga (Connection using selfless actions). It was believed that if you follow these paths properly, you will be enlightened. It was also during this time that yoga was incorporated in Buddhism.

It was in the classical era, around 200 BC, that Yoga-Sutras were compiled by Patanjali. Pathanjali’s yoga sutra is regarded as the first systematic presentation of yoga. Before this, yoga was a collection of various ideas, beliefs and techniques, which often contradicted with each other. He is called the Father of Yoga and his writing on yoga consists of 196 sutras, which put a great emphasis o Raja Yoga, for the attainment of moksha. The Ashtanga Yoga or the eight Fold Paths of yoga is the base of classical yoga. They are:

Most of the modern yoga styles are influenced by Ptanjali’s Yoga-Sutras.

This era puts more emphasis on treating your body as a temple and cleansing your body from inside as well as from outside. Here focus is more on the present conditions and it teaches people to accept the reality and gives more attention to the moment you live. Various practices were designed by the yogis, which helped in rejuvenating the body and providing a long life. This gradually led to Hatha yoga, which consists of yoga with asanas. Tantra yoga, which consists of chants and rituals, was also developed side by side with Hatha yoga. Tantra yoga helps in cleansing the mind and body and to break the knots that tie a person to his physical existence.

Modern period saw yoga not only restricted to India alone, but spreading rapidly to the Western countries. During the 1800s and 1900s yoga masters travelled to the West and attracted lots of people from these countries. Many were attracted towards this form of exercise. The main credit for the spread of yoga in the West goes to Swami Vivekananda. It was his speech in 1893 at the Parliament of Religions in Chicago that made yoga and Vedanta  known to the people in the West. He was a disciple of the renowned Saint Ramakrishna Paramahansa.

Ramakrishna Paramahansa’s ‘Autoboigraphy of a Yogi’ is very famous. His teachings are called as Yogoda and are very popular in the West.

The Jnana Yoga of J. Krishnamurthy also caught the attention of many people. ISKON was founded in US by Shrila Prabhupada and this propagated Bhakti Yoga. Sri Krishnamacharya helped in spreading Hatha Yoga, which is now carried on by BKS Iyengar.

Sathya Sai Baba and Rajneesh (Osho) are other spiritual yoga gurus who had great role in the spread of yoga. They have disciples all over the world.

You can say that yoga is a spiritual journey of the Mind, Power and Body and it helps in getting your peace of mind and overall wellbeing.