Castor oil has lots of health benefits. It is also good for your skin and hair. One of its amazing benefits is for your eyes. First of all let us know about castor oil. 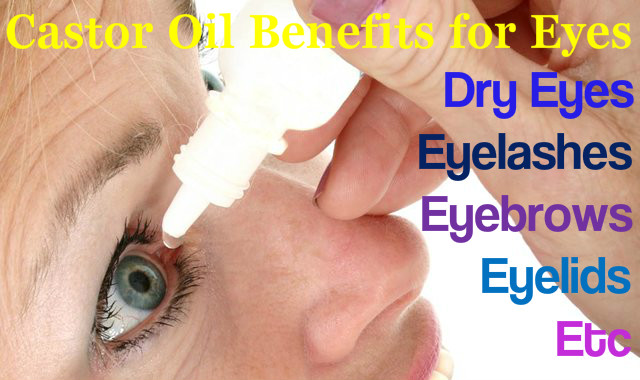 What is Castor oil – History?

Castor oil is a vegetable oil and you get this oil from the castor bean seeds in its purest form. It has no taste, color or odor. It is obtained by pressing the castor been seeds after the hull is removed. Castor oil was widely used in Egypt from the ancient times and later on it was accepted as a medicine in China and Persia. At the time around 4000 BC, ancient Egyptians are believed to have used castor oil for burning lamps.

The records of Greek voyagers like Herodotus say that Egyptians used castor oil as an ointment. Cleopatra is said to have used castor oil for making the whites of her eyes brighter. Castor oil was introduced in America and Europe during the 17th century.

Castor oil is used as a natural remedy for many health, skin and hair problems. It is known for ruts laxative, cathartic and purgative properties. It is also very much favored by celebrities like Britney Spears and Angelina Jolie.

Amazing Benefits of Castor Oil for the Eyes:

If your eyebrows have very less hair and if your eyelashes are not long and thick, you can apply castor oil to get the desired benefits. Apply castor oil regularly on your eyebrows and eyelashes. This helps in stimulating hair growth and gives you thick and dark eyelashes and eyebrows. If you have ingrown or inverted eyelashes, then also you can use castor oil to manage then. Castor oil is also very beneficial for getting relief from the irritation that you may feel inside your eyes as well as on the area surrounding your eyes.

To apply castor oil on your eyelashes, you can follow the steps given below:

Castor oil is very beneficial for dissolving the early cataracts. Experts suggest that you put a drop of castor oil in each eye every night before you go to sleep. Use this before you go to sleep because this oil can cloud your eyes, so that you have difficulty in seeing for a while. So, it will be more safe if your use it night. Cataract takes two months to six months to disappear, depending on how advanced it is. You must take care not to use castor oil that is made for baths or oil packs for treating your eyes.

If you have dry eyes, castor oil is one of the best natural remedies for treating your dry eyes. Since it the eyes, you have to make sure that the castor oil you use is safe for your eyes. So use castor eye drops. Using this helps in lubricating your eyes and ensures that your eyes always stay moist. Dry eyes can cause various other problems like keratoconjunctivitis sicca. So you must never neglect dry eyes. Treat dry eyes as soon as possible. You will soon get relief from dry eyes by applying castor oil in your eyes.

Taking some castor oil and massaging your skin around the eyes gently with your finger tips can help in providing you smooth and soft skin. Apply this regularly to get the best results. It is also great for helping you prevent wrinkles and dark circles. When you apply this oil on your skin, the circulation of blood in your skin is increased. This helps in providing you flawless and beautiful skin. With regular application of this amazing oil, you can prevent the appearance of crow’s feet and other signs of aging like fine line and age spots on your skin. So, apply this oil regularly to remain young looking and beautiful for a longer period of time.

So, you can see that castor oil is great for your eyes as well. Using castor oil eye drops can help you have healthy and beautiful eyes. If you have never tried this oil for your eyes, try it and see the difference it makes to your eyes.