Different Types of Malnutrition and Their Effects

Food is very important for a healthy body and mind. You must have a balanced diet to stay healthy and free from diseases. But there are people in this world who do not get enough food and die from lack of nutrients. So, next time when you buy excess food and waste it, remember about these unfortunate people and you will never waste even a morsel of food.

A large number of people suffer from malnutrition or lack of proper nutrition. We can say that malnutrition is when the body is deprived of some or all the nutrients needed for the proper functioning of the body. It is estimated that about 578 million people in the Asia-Pacific region alone, is affected by malnutrition. Most of them are little girls and boys, under the age of 5. Malnutrition causes various illnesses and even death. We will have a look at some statistics related to malnutrition: 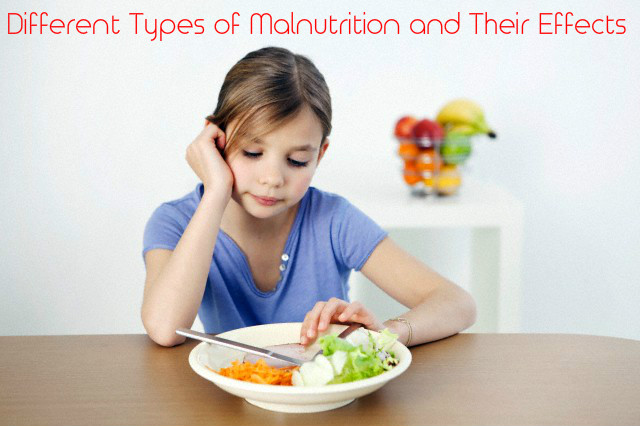 According to the survey conducted by United Nations Food And Agriculture Organization, it was found that one out of every 8 people is suffering from malnutrition. 32.5% children living in developing countries are undernourished. At least 14.5% of the death of children under 1 to 5 years occurs due to starvation. So, you can see the tragedy that malnutrition can cause to children as well as adults.

Impact of Malnutrition on Human Body:

Malnutrition and starvation greatly affect children, adults and pregnant women and have devastating impacts on them. These also give rise to serious socio-economic impacts.

Effects on children: Children need nutritious and protein rich food as it is the time when they grow at fast rate. If they lack nutrition, they suffer from various health hazards like mental retardation, poor immune system, stunted growth, micronutrient deficiency, GI tract infections, anemia and in extreme cases – death.

Effects on pregnant women: Pregnant mother needs nutrition for herself as well as the baby growing in her womb. So if she suffers from malnutrition, the health of the baby growing inside her will be poor and in addition, she may have a difficult labor, and postpartum hemorrhage. Malnutrition also makes her anemic.

General effects: When a person suffers from malnutrition, he will have a very weak immunity power. As a result, he will be more prone to diseases and infections. The muscles become less active and the functioning of the kidney will also be impaired. He will also suffer from apathy and depression.

Acute malnutrition or wasting: This is caused when there is a sudden and drastic loss of body weight. Three types of clinical malnutrition arise from it.

Chronic malnutrition or stunting: This is found when the person suffers from malnutrition for a long period of time. The consequences that result from it also last for a long time. It starts before the baby is born, due to the poor health of the mother during her pregnancy. This causes stunted growth, which means that the baby will have weight less than the normal weight and the size will also be smaller. The main causes behind stunted growth of the baby are poor beast feeding, lack of proper nutrients and infections. Stunting is a serious concern because after a certain age it becomes irreversible. So, you have to be careful from the beginning and make sure that the pregnant mothers and young girls are given proper medical treatment. This way the child born to them will be normal and grow normally.

Micronutrient malnutrition: This takes place when the body lacks Vitamins A, B, C and D, calcium, folate, iron, iodine, zinc and calcium. These vitamins and minerals are essential for various body functions and if you lack any of them, it can make you undernourished.