Phenylalanine is an essential amino acid and your body does not produce it on its own. You will have to get it from the food you eat or through supplements. Amino acids are the foundation for the synthesis of proteins in the body. Inside the body phenylalanine gets converted into tyrosine, which is also an amino acid. This is used for the synthesis of dopamine and norepinephrine, two major neurotransmitters. They promote alertness and focus. 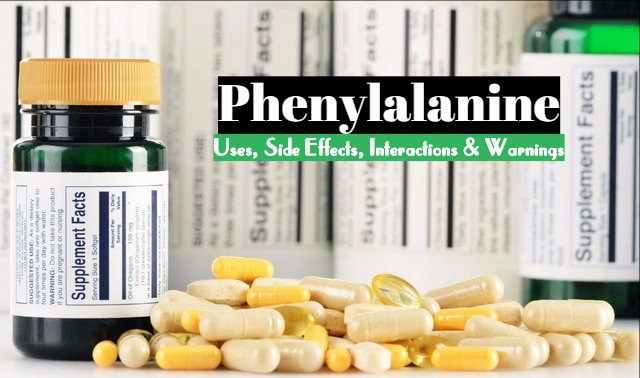 Phenylalanine can also have an affect your mood, pain, perception, memory and learning. It also influences your appetite suppression. Phenylalanine is used commonly for treating arthritis, migraine, depression, Parkinson’s disease and schizophrenia.

What is phenylalanine used for in the body?

L- The ‘L’ in front of amino acids or other supplements means that it is in its free form, the amino acid is not attached to another amino acid. This is the most common form and is found in any food that contain proteins. Aspartamine, an artificial sweetener, is rich in phenylalanine.

D- The‘D’ means that it is a synthetically created amino acid. ‘D’ stands for devo (right), while ‘L’ stands for levo (left). The D-form is a good painkiller. It is not found in any food products. It has to be manufactured in the laboratory.

According to early research, phenylalanine is good for the treatment of certain forms of depression. Its supplements have been used for a number of medical conditions and issues.

Depression: for depression you have to take in approximately 3 to 4 g L- phenylalanine or 150 – 200 mg of dl-phenylalanine.

Results: The enzyme that cause pain in the body are blocked. It is effective in treating some  chronic pain.

Deficiency of phenylalanine can cause the following symptoms:

In infants who are only a few weeks old, phenylketonurians can cause brain damage if not treated on time. Today, in some countries like the US, newborns are tested for PKU within 48 to 72 hours after their birth. A person with PKU should avoid foods and beverages that contain phenylalanine and they also have to take in tyrosine supplements. This is necessary for the proper development of the brain.

Symptoms of PKU are:

There is a lack of scientific studies as to how well phenylalanine can be utilized for medical purposes, such as for Parkinson’s disease symptoms, depression and chronic pain. However, few explorations into such use have been conducted.

D- Phenylalanine has undergone some research so as to see how it is useful for the treatment of chronic pain. Very few studies have been made to show how efficient it is and the positive results it can give. The studies made lack in detail, results and possibly oversight. More studies are needed to see how efficient it is and whether it is safe for us to use. However, whatever studies have made shows that use of dD phenylalanine for chronic pain provide no beneficial effects over the administration of placebo.

A number of studies have been conducted since 1970 to see whether phenylalanine can be sued as a reliable treatment for depression. Here also the lack of studies has failed to give a complete picture. It is still uncertain whether it has a good effect on the mood. But some individuals have reported that there is an improvement in mood when they took phenylalanine. Still, additional research is needed to verify the efficacy.

Phenylalanine and pyroxene have been used for treating schizophrenia. But its benefits as a treatment for depression, anxiety or bipolar disorders are yet to be proved completely.

In 1977 20 patients suffering from depression were given 75 mg to 200 mg phenylalanine for 20 days. Four out of them showed significant improvement, while eight were cured. Four showed mild response while the last four showed no improvement after being treated.

In 1984, phenylalanine was combined with selegiline and used as an antidepressant. 155 peope with depression were given this. Almost 90% of the patients showed effective results and 81% showed positive results.

Studies made on animals show that  phenylalanine can  improve balance, walking, reduced rigidity, depression as well as speech difficulties associated with Parkinson’s disease. Till date no studies on humans have been done.

Side effects and contradications for use:

L- phenylalanine may interact with drugs taken in for the treatment of tardive dyskinesia, which is a side effect that people suffer from when they are taking neuroleptics.

A few neuroleptic drugs with which phenylalanine may interact or interfere with are:

Phenylalanine can interact with some of these antidepressants, like the following:

This is a drug for Parkinson’s disease. Phenylalanine may reduce the efficiency of these drugs.

the absorption of baclofen may be interrupted when you use phenylalanine. This drug is used for reducing and to get relief from muscle spasms that often come with Parkinson’s disease.

When selegiline is combined with L-phenylalanine, it can enhance the antidepressant effects of phenylalanine. So, you should never take them together.