Rice is consumed in most parts of the world and it is the staple diet in many countries. In coastal areas, where the production of rice is more, it is consumed regularly by the people. By having rice in the right amounts, you are offered certain nutritional benefits. So, it is important that you know the nutrients in rice. This enables you to make good use of rice in your diet. Carbohydrates, proteins, fat, vitamins etc are essential for you and should be consumed daily for having a healthy body. 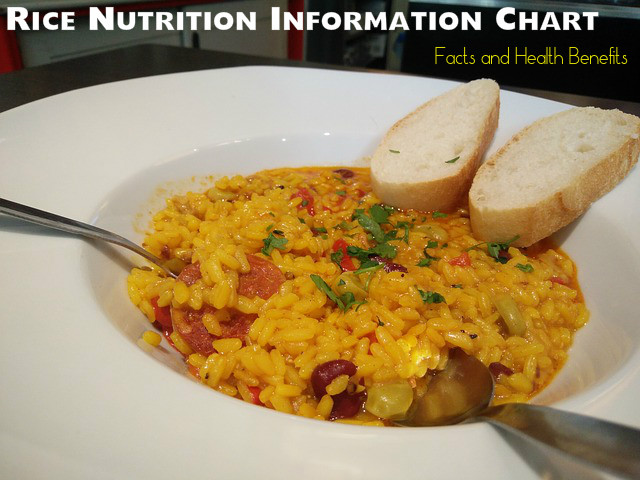 Rice contains certain nutrition in fixed amounts. Here we will consider the nutrition present in one cup of rice. One cup amounts to about 195 gm. The values are being considered on a 2000 calorie diet. Beyond this, it can vary.

One cup of rice contains about 216 calories. This calorie you get by consuming one cup of rice comes from carbohydrates (185), fat (14.7) and alcohol. It consists of about 11% of the serving.

Cholesterol is present in very low levels in rice, almost 0% in this serving.

One cup of rice contains about 44.8 gm of carbohydrates, which is about 15% of the serving. Out of this, 15% consists of the dietary fibre and the rest are sugars.

Carbs in rice are mainly in the form of starch. It is made up of long chains of glucose known as amylase and amylopectin. Amylase and amylopectin have different properties. Rice that is high in amylase does not stick together after the rice is cooked. Basmati rice is a good example of this type of rice. Amylose also helps slowing down the digestion of starch. It is often associated with a resistant starch, a type of healthy fibre.

Rice that is low in amylase and high in amylopectin stick together after cooked. This trice is perfect for puddings and risottos. It is also easy to eat with chopsticks, which makes it popular in Asian cooking. One of the negative points about this rice is its high digestibility. This can lead to an increase in blood sugar, especially in people suffering from diabetes.

One cup of boiled brown rice contains about 3.5 gm of fibre in it. Resistant starch is found in varying amounts in brown and white rice. It is good for feeding the beneficial bacteria in the gut. Apart from the resistant starch, fibre is found in high amounts in the bran, which is removed from the white rice. Bran mainly consists of insoluble fibre, such as hemicelluloses. It hardly contains any soluble fibre.

Minerals present in this rice proportion can be calculated in the following manner. It contains 19.5 mg of calcium, 0.8 mg of iron, 162 mg of phosphorous, 83.9 mg of magnesium, 83.9 mg of potassium, 9.8 mg of sodium, as well as copper, zinc, selenium and manganese in small proportions. Rice is low in sodium. Rice is said to be a good source of both selenium and manganese.

About 5 gm of proteins are found in this serving, which consists of 10% of the serving.

Rice is rich in vitamins also. Vitamin E, K, and B6 are found in rice in 0.1, 1.2 and 0.3 gram proportions. Other than these, rice also contains thiamine, folate, niacin, choline, riboflavin, betaine etc in reasonable proportions.

Rice nutritional value can help you remain healthy by consuming it in the right proportions. You can eat rice daily. It helps in weight loss, weight gain and keeps you healthy if you have it properly. In the data given above, we have considered brown rice, white rice, long grain and cooked rice. The inflammatory action of rice in the diet is moderate. To enhance its nutritional properties, you can combine rice with other amino acids. This provides you higher amounts of proteins.