Wheatgrass Side Effects and Some Benefits or Uses

Wheatgrass is also known as ‘gehu ke jawara’ in Hindi. It is widely used by people from the birth of civilization. It was found initially in Egypt and Mesopotamia. People here used it to heal wounds and cuts. Wheatgrass is rich in nutrients. Wheatgrass is a kind of grass and its roots, rhizome and the part above the ground are used for making medicine. 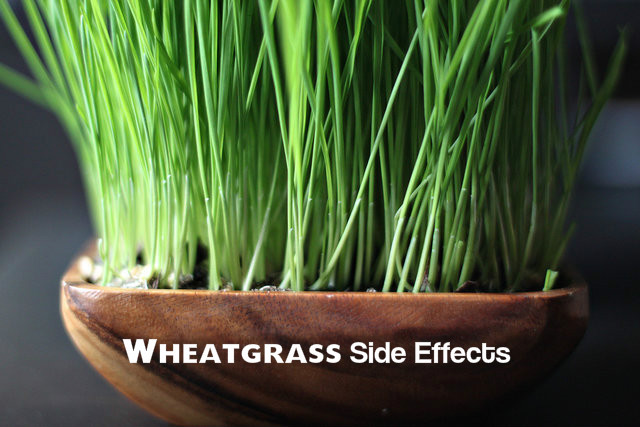 Almost 70% of wheatgrass is made up of chlorophyll. This is very powerful and is often referred to as the concentrated energy of the sun. Chlorophyll is great for boosting your immune system. Since it has some properties of haemoglobin, it helps in increasing the blood count in your body. It is rich in other powerful minerals, as well as vitamins and enzymes. Even though it has all these benefits, there are some downsides to it as well.

Usually we consume wheatgrass in the form of juice. This juice is rich in vitamins, minerals and amino acids, as well as chlorophyll, phytochemicals etc. Vitamins like Vitamin A, C and E, and minerals like calcium and magnesium, and amino acids are found in wheatgrass. You get almost 1 gm of protein for every teaspoon of this juice.

Side Effects of Wheatgrass:

People who are reactive to gluten are not much affected by consuming wheatgrass juice. But those who are sensitive or allergic to wheat should stay away from wheatgrass juice. One of the most common allergies caused by wheatgrass is swollen face or throat. So, if you experience these symptoms after you consume wheatgrass juice, you should immediately go to a doctor and take proper medication in necessary.

Another important point to keep in mind is that people who are sensitive to mold must make sure that the wheatgrass that you consume is not infected by mold. If the wheatgrass juice that you consume has a bitter and musty taste, it means that it is infected with mold. Mold infection can take place under conditions like low air circulation, high humidity or high vegetation density. The best way to make sure it is not infected with mold is to cultivate wheatgrass yourself. This way, you will be able to prevent all the factors affecting wheatgrass health.

You may suffer from diarrhoea when you consume excess of wheatgrass within a brief time span. This is because your body cannot digest it properly when you have too much of wheatgrass in a short time. Diarrhoea is one of the most common side effects of wheatgrass. The best way to prevent it is to consume it in limited amounts in the beginning. Then you can increase the dose of wheatgrass juice gradually, until your body is able to digest larger amounts of wheatgrass.

Nausea is a type of detoxification process that takes place in the body. It can be due to a specific taste, left by wheatgrass juice on the taste buds of some people. As mentioned earlier, wheatgrass is packed with chlorophyll. This is excellent for the removal of toxins. This is done by inducing the tissues to release the toxic elements stored in the body. This release of toxic elements can cause nausea. As your body releases more and more toxic elements, the nausea that you experienced in the beginning will gradually subside with time. The taste of wheatgrass is not very impressive, but you can make it taste better by adding some fresh lemon juice to it. You may also add a pinch of cinnamon powder or a teaspoon of honey to make it taste better.

Very often you also experience headache and dizziness along with nausea. This is also a side effect caused by the detoxification process that takes place in your body as a result of consuming wheatgrass juice. Other than headache and nausea, you may also experience some other detox symptoms, like skin eruptions, stomach ache, coughing, congestion in the nose and mild fever.

In spite of the drawbacks mentioned above, the benefits of wheatgrass are so high that they surpass the drawbacks. Presence of almost 70% chlorophyll in wheatgrass helps in preventing anaemia and other problems of blood deficiencies.

It is said that chlorophyll may have some positive effect on cancer also. So, make sure that you keep an eye on the amount you consume.

Some of the Benefits of Wheatgrass: