How is Dandruff Caused by Fungus Infection(Scalp Ringworm)

Dandruff is caused by many factors, the main reason being manifestation of flaking of the scape. At times, it results in itching and inflammation. If they are quite grave then it can lead to redness and ugly shite spots all over the hair locks. It doesn’t have extreme effects on the scalp but at times it can lead to higher complications. Moreover, you feel embarrassed if you are suffering from such acute condition. Hence, it is very important to take good care of hair or else you can end up having damaged hair due to scalp itching and dandruff. Many a times, you feel ashamed of this condition of your scalp. 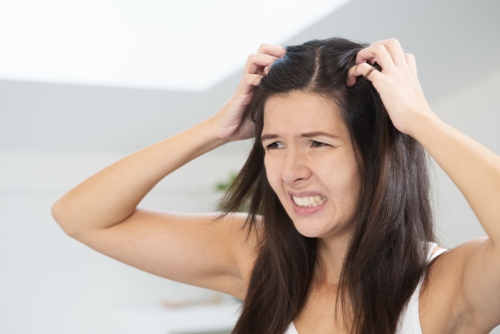 Is Dandruff Caused by a Scalp Fungal Infection?

The main reason for dandruff is generally improper hair care routine. New studies say that infections can also be caused by fungal infection(scalp ringworm) in your hair, especially in the monsoon season. Be it any season, your body constantly sheds dead cells from the skin. This process is important as it helps in rejuvenating yourself. Every month dead cells are shredded away and they are replaced by new ones which help in making the skin good and healthy. They come out as minute flakes. Dead cells are released from various parts of the body like the arms, legs, torso, head and neck.

Dandruff may occur due to many reasons. They usually occur from shredding of dead cells from the scalp. Only difference is that dandruff is visible in the form of white flakes all over the head. Most of the times, it is embarrassing to have dandruff as they accumulate of various parts of scalp and collects on the collar or back of the shirts and dresses. Many issues related to physical as well as self-esteem come up. According to recent research and updates, it is said that dandruff can also occur due to formation of yeast like fungus which grows on the scalp due to unchecked Malassezia fungus.

Malassezia Fungus – How it Causes Dandruff:

Malassezia fungus is a very common inhabitant on the head. They damage your scalp to high extend. They always try to feed on the oil secreted by the hair follicles on the scalp. The by-product causes itching to a high extent. At times, you can also experience inflammation in the scalp which can increase if not treated on time. In normal cycle growth of the Malassezia fungus, it thrives on the scalp without causing flaking or itching in the head. This can be even more dangerous as you don’t come to know about the symptoms in earlier stage, creating problems in days to come. Normally, this problem doesn’t lead to formation of dandruff. But when there is over growth of the fungus, it leads to formation of dandruff. You can also experience excess shedding of the dandruff on the scalp as well as hair. This is, indeed, a visible and embarrassing condition as it makes you feel very conscious in public.

Some Theories Related to Malassezia Fungus:

There are many Theories on Malassezia fungus, each of them providing a different conclusion. One of the theories suggests that the reaction of the immune system with the fungus leads to formation of dandruff. This reaction may depend on a variety of conditions coming up in the body, one of them being body chemistry. Many a times, perspiration and allergic reactions caused by certain hair products play a vital role in causing dandruff. All such conditions can lead to fungus growing on the scalp. If they are kept unchecked for many days, they can lead to itchiness, irritation, flaking and high level cell turnover on the scalp. All these make dandruff a common phenomenon for most of the people who don’t take proper care of their hair.

Due to continuous and excess growth of fungus on the scalp, normal cell turnover rate changes to two weeks, which is about one month in any normal scenario. As a result, many of the dead cells are shredded in bulk. If they are not shredded, they start forming greasy lumps in the scalp which can be easily seen by naked eyes. Natural oils secreted by the scalp causes the clumps to stick to the hair and make them look shabby. This also leads to lifeless and dull hair.

There is one more theory in support of this fungus. One of them says that dandruff is caused by Seborrheic dermatitis, or seborrhea, which is a kind of skin rash that affects the scalp highly. This condition also leads to itching and redness. Inflammation is also caused by such fungus on the scalp. So, try to avoid growth of such fungus on your scalp and hair, especially in rainy season, so as to save yourself from a bad hair day. Such conditions prevail mostly in adults and young people but, at times, older people can also fall prey to similar problems. It is observed that such problems affect mostly that part of the scalp where sebaceous glands are present. This is because this gland secretes oil or sebum which is essential to keep the hair soft and moisturized. When the immune system reacts with the yeast germs which are there in sebum, you can see the presence of dandruff.

All the extensive research regarding the Malassezia fungus says that it is the main reason behind many of the problems related to dandruff. So, take care while washing and combing your hair. If you find such symptoms then try to take the help of trichologist as soon as possible to avoid further problems. Many a times, dandruff gets worse when people are under high stress and this leads to clumps that stick to the hair.  Weather changes also affect the formation of dandruff in hair. Flakes can be treated with an anti-dandruff shampoo or lotion and this prevents further problems in future.