Lipstick forms a very important part of your makeup regime. Without a tint of color on your lips, your face looks incomplete. They are available in different kinds, types, and colors. Have you ever wondered how this famous cosmetic item came in to being? Well, here is an insight in to the history of lipsticks. 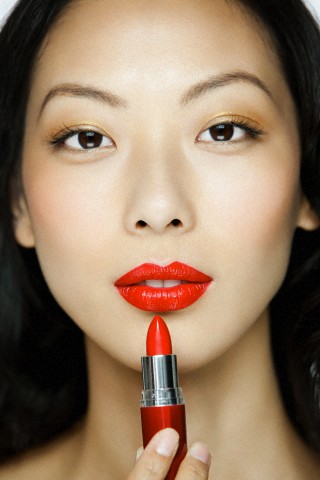 History of the Lipstick Colors:

Here are a few facts about the lipstick that you people would love to know.

Women have always been fascinated by makeup. Natural products like fruits and minerals were the earliest ingredients that women used to prepare their own makeup. Coloring lips was also a common practice. As for the origin of the lipstick, it is a contradictory topic.

A blend of white lead and crushed red rocks was used to make lipstick as early as 3500 BC. It was used and made popular by the Sumerian Queen Shub-ad. Even though it was poisonous, the women used it to color their lips.

In Greece, prostitutes used lipstick to distinguish them from the “good” women. This was in the 1000 BC Grecian Empire. By 700 BC, all women used it, irrespective of their caste and rank. Seaweed, crushed berries, crocodile dung, red ochre, flowers, various resins, and other such strange and weird ingredient were used for preparing the lip color.

The Egyptian women were totally crazy over coloring their lips. Red ochre, carmine, and several other kinds of dyes were used to create different shades. Harmful and toxic bromine mannite was mixed with iodine to create a dark purple color. They were toxic enough to even cause death, leading to the phrase “kiss of death”.

Queen Cleopatra was a beautiful and mysterious lady who came on later in the Egyptian era. She used blended beeswax with carmine or crushed ants to color her lipstick. Fr a shiny gloss, she used fish scales. This was safe and non-toxic.

The women of Rome needed a manager for a team of cosmetic slaves. They were crazy about cosmetics. Even men wore lipsticks. The different shades indicated the social status.

An Arab cosmetologist by the name of Abu al-Qasim al-Zahrawi was the inventor of the first solid lipstick. These were rolled perfumed sticks.

The church banned lipstick in Europe, in the medieval age. People who wore lipsticks were considered to be an incarnation of “Satan”, and cosmetics were used only by prostitutes.

Queen Elizabeth I loved lipstick, besides the other kinds of makeup. She used egg whites, cochineal gum Arabic, and fig milk. The first lip liner was also invented in her court.

In the 17th century, makeup was considered to be a “work of the devil”. In 1770 AD, a law was passed by the parliament to consider every woman who wore makeup to be witches, and burn them to death. This made women wear makeup secretly.

Queen Victoria was averse to makeup, so women in her reign had to smuggle cosmetics and look for other ways to do their makeup.

As for USA, Martha Washington loved makeup, and she used ingredients like raisins, beeswax, lard, almond oil, sugar, wax from sperm whales’ heads, and balsam to make her lipstick.

Evolution of the Lipstick:

By 1850, the attitude towards cosmetics started changing. Vermillion and lead were ingredients that caused harm to health.

In 1884, perfumers in Paris made the first modern lipstick. It was made with castor oil, beeswax, and deer tallow, and wrapped in silk paper.

Makeup was declared legal by 1890, and lipstick tubes were found in every place by 1915.

The swivel lipstick was introduced in 1923, which made it easier to use. Women started expressing themselves in different thrilling ways by using lipsticks. Almost in every decade, the lipstick fashion kept changing. Women with slender and boyish features used lipsticks for delicate lips.

By this decade, the way of using makeup changed. The lips moved from the small delicate ones to more square and elongated style. A reddish brown shade was used for the lips. Max Factors, Tangee, and such brands were popular in the 1920s and 1930s.

With the Great Depression, women could not afford expensive cosmetics. So, they used Tangee or Tattoo lipstick tubes which were cheaper.

With the World War II breaking out in this decade, women were encouraged to use lipsticks in order to boost the morale spirit. As such, it became a necessity. The first kind of tube rotated lipsticks came during this time.

Rita Hayworth, Joan Crawford, Bette Davis, and other Hollywood stars used bright lipstick for inspiring the nation during the crisis.

By late 1940s, a formula was finally found out by Ms. Hazel Bishop for a long lasting lip color. She was an organic chemist who tried more than three hundred experiments.

In this decade, there were a number of Hollywood divas, who made lipsticks very popular. Conventional rules of makeup were changed by them.

This decade gave more importance to defining the eyes, and gave the lips and subtle and soft look. Soft colors were only used.

By the 1970s, the hippie culture became prominent. Black and purple shades were used by the rebels, glam rockers, and new romantics. Glossy red or burgundy was used at disco clubs. There were feminists who protested against lipsticks, too.

The 1980s gave the men the chance of wearing lipsticks. Black, red, and even metallic and neon shades were used in this decade.

The 1990s saw a boom in the makeup industry, leading to a much higher demand for lipsticks. All kinds of colors ranging from bright to light to flesh and brown lipsticks were used. To suit the different skin tones, a number of different shades were invented.

With the new millennium, new trends and styles were invented to accentuate the lips. Matte, sheer moisturizing, creamy, and every other type are now available to suit every skin tone. You even get double shaded lipsticks called duo chrome lipsticks.

Lipsticks with a neon shade are also in fashion these days. You get green, blue, hot pink, orange, purple, and every such color.

Choose your favorite color in the market, and flaunt your lips in style. A tip to become gentle on your lips is to stick to organic lipsticks.